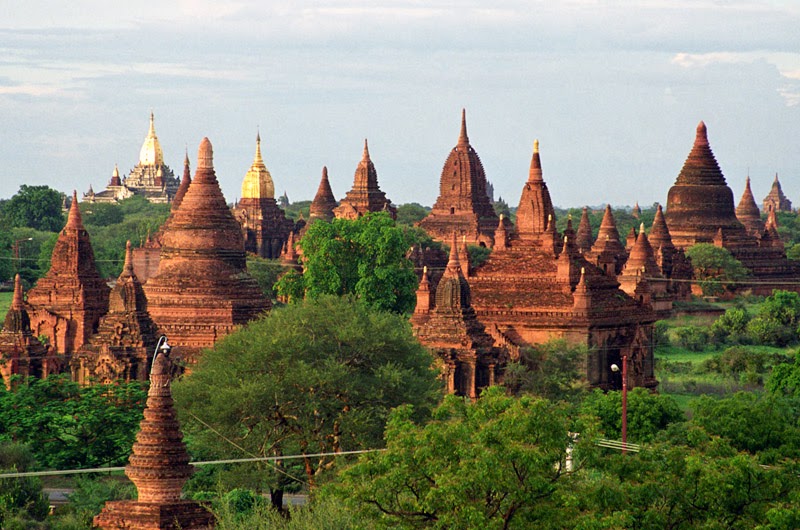 Thousands of temples, stupas and monuments in astounding shapes and sizes were built over two and a half centuries by the earliest Myanmar kings in the glorification of their religion. The monuments are packed in 40 km² (16 miles²) of land, rust coloured plains flanked by the great Ayeyarwaddy River in heart of the country. Rival in scope and historical significance to the world heritage sites of Angkor Wat in Cambodia or Borobudur in Indonesia, Bagan is not to be missed. A visit here is undoubtedly one of the most memorable travel highlights in Myanmar.

The kings of Bagan

From the 11th to the 14 centuries, Bagan was the earliest unified seat of Buddhism of Myanmar. King Anawratha is credited as the founder in 1044 AD, using Buddhism as a tool to unite the people and sparking the royal building trend. Architects, artists, craftsmen and slaves were brought from nearby countries to create temples with walls as thick as a house, stupas covered in elaborate stone reliefs, and pagodas with intricate murals of the Buddha’s reincarnated lives. The twelve kings following Anawratha would each try to outdo the last, the result being a spectacular legacy of religious monuments.
Despite the tolls of weather and neglect, many structures have survived well to the current day. Mosaic artwork covers some buildings, gold leaf or carvings on others, and vines over crumbling stone facades on still more. Depending on how one defines and counts the structures, numbers range from 2,100 to 4,400 temples in the heart of the archaeological site. Lenient regulations mean visitors can still climb the staircases of the tallest stupas to enjoy views the temple-studded landscape in all its glory. Watching the sun illuminate the outlines of the ancient ruins in the mist of dawn or dusk is yet another breathtaking experience of Myanmar. It’s no surprise that Bagan remains one of the most fascinating archaeological sites in all of Southeast Asia.
Bagan was once one of the most glorious Burmese kingdoms with trading relations extending to the ancient empires of India, Ceylon and Khmer. Other Myanmar Kingdoms such as at Thaton in today’s southern Myanmar were overrun by Bagan, and their culture and manpower absorbed into the Bagan Kingdom. In the late 14th century, the Bagan Kingdom abruptly scattered to the winds, purportedly with the arrival of the Mongols under Ghengis Khan. Its monuments remain, however, and have defied the ravages of time and nature. The majestic vestiges of the kingdom are ranked by many today as one of the great wonders of the world.
Even the great Marco Polo made reference to Bagan in The Description of the World, the narrative of his two and a half decade long odyssey into the Orient and beyond:

The towers are built of fine stone, and one has been covered with gold a finger thick, so that the tower appears to be of solid gold. Another is covered with silver in a similar manner and appears to be made of solid silver…They make one of the finest sights in the world, being exquisitely finished, splendid and costly. When illuminated by the sun they are especially brilliant and can be seen from the great distance.

Single storey temple known for Bagan’s best preserved mural paintings dating back to 11th century. The colours are still bright. Ceiling has floral designs and Buddha images and on walls are Jataka Buddha’s previous life stories illustrated. Myingaba Gu Byaukgyi is one of the few Bagan sites that has been protected by Unesco.

The Manuha temple was named after Mon king Manuha was brought to Bagan as a prisoner of war over Buddhist holy book “Tripitaka”. The mon king had refused to share Buddha’s teachings with uncivilized Bagan folks and to his misfortune his kingdom was sacked by Bagan troops. While being kept captive King Manuha wished to build a Buddhist temple. He sold his ring with precious stones and used the money to build the temple. The temple rooms feel uncomfortably small with large Buddhas. Illustrating his feeling while imprisoned in Bagan. The Manuha temple was built in 6 mths 1059 AD during the reign of greatest Bagan King, Anarawtha.

The tallest temple in Bagan. 67 meter high Thatbyinnyu temple has 5 floors but only the ground floor is currently open for the public. Thatbinnyu was built by 3rd king of Bagan King Alaungsitthu in early 12th century. Thatbyinyu is best appreciated from outside.

Largest temple in Bagan and with finest brick work. Dhammayangyi temple was built in the 12th century during the reign of ruthless King Narathu. Dhammayangyi temple is considered ill faith temple, as the king often commanded to worker men’s arms to be chopped off for unsatisfactory workmanship and murdered his own father, brother and wife. Even a pin was not allowed to pass between bricks during the construction.

The Golden Sandbank. According to legends location of the pagoda was chosen by Bagan king’s white elephant carrying a Buddhas tooth relic donated by King of Sri Lanka (Ceylon). The shimmering gold gilded Swezigon stupa is made of sandstone and covered with layers of leaf gold. It is perhaps the most beautiful monument in Bagan. Constructed during the reign of king Anarawtha 1044 who introduced Theravada Buddhism to Bagan Kingdom.

This brick built 3 terraced stupa offers great views over Bagan in the mornings and for sunset. The terraces have grazed tiles with Buddha’s lives and teachings “jataka story” illustrated. The pentagonal shape stupa was built by King Narapathusitthu in the 12th century.